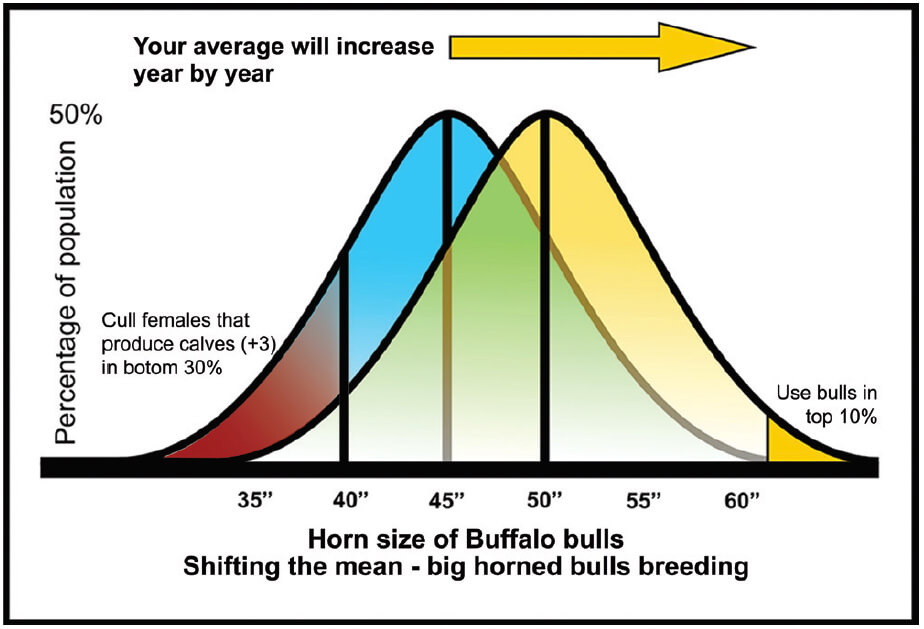 The livestock industry has been breeding animals since the early 1700. George Mendel (1800) laid the foundation of modern genetics and selection for single gene traits (e.g. coat colour) with a predicted outcome. Leading to the recording of pedigrees that were used to plan line breeding in the yesteryear stud breeding (Pure breeding – fixing single traits). In the early 1900 performance recording of measurable economically important traits (growth, milk production, etc.) started and lead to the concepts of heritability of a measurable trait, genetic variation, generation interval, breeding values and selection that ensures genetic improvement of the next generation. This means there was a fundamental shift from pure breeding of one or two superior animals in a breeders  lifetime through line breeding (visual selection) to a more population-based approach to breed a whole population of superior animals based on performance. This has led to significant improvement in economically important traits in the livestock industry (poultry, dairy, wool, etc.). We will show how the wildlife breeders can piggyback on the succsess of the livestock breeding industry in a simple way that will ensure their genetic progress in economically important traits for the wildlife industry (Reproduction; Growth: weight [meat], horn length [trophy]; functional efficiency & carcass traits). Selection for horn growth will be used in this article as selection for the other traits are discussed in detail in livestock industry and the same principle apply. Genetic improvement of wildlife is thus based of a few basic principle that have been tried and tested in the livestock industry for several decades:

The basis of a pedigree is known sires and dams that are verified using DNA (Figure 1.). The pedigree can be used to identify  sires and dams that produce superior progeny that are retained in the herd. When buying animals one can prove this animal is from a renowned sire/dam, e.g. Nike son, Piet daughter, Tyson grandson, Brits granddaughter, etc..

Wildlife breeders still tend to buy based if they are the progeny of a well-known bull. Please take note that not all well-known sires transmit their superiority to their progeny and I remind you of the concept describes as breeding the so-called “Black Sheep” (when two superior parents produce inferior progeny). You can also use the pedigree to verify/predict origin of Sable antelope using DNA (Mito and Nuclear). In buffalo purity of East African/Kruger/Addo/etc. can be verified by the fact that the ancestors are known (DNA verified) and their origin is known e.g. East Africa, Project buffalo, etc. So a DNA verified pedigree is a non-negotiable prerequisite for wildlife stud breeders integrity and trustworthiness of his data.

Horn length (Rowland Ward and SCI) is a measured trait that is influenced by multiple genes and will vary from a minimum to a maximum with most animals around the average, a normal distribution as illustrated in Figure 2.

Horn length (Outer Spread and SCI tip to tip) (Phenotype – what we see or measure) is influenced by both environment [E] (Nutrition, weaning stress, disease management, etc., influence between 67 to 80%) and genotype [G](genetic potential). The amount of genetic superiority and/or inferiority of horn length transferred from parents to their progeny will vary between 20 and 33%, and is called the heritability of a trait. Please note that 50% of the genetics come from the Dam and 50% comes from the Sire. Progeny do not always receive the good genetics form a superior bull and/or superior dam, an animal’s progeny will also be normally distributed as in Figure 1 and superior progeny should be retained for breeding, let’s identify them through measuring. The basic principle of selection is to mate superior bulls (Top 10%) (Table 1*) to average and above average cows (+50%) (Table 2*).

*PLEASE NOTE: THE DATA IN THIS TABLE IS NOT A TRUE REFLECTION OF THE ACTUAL ANALYSIS, BUT ONLY REFLECTS THE CONCEPT If this practice is followed annually with an evaluation of sire progeny performance and dam progeny performance, removing bulls and cows producing inferior progeny (your breeding goals) will lead to a continuous improvement of your herd (Figure 3). You should also calculate retention (number of progeny a bull or cow produces that is retained for stud breeding) of your bulls (e.g. +30” progeny) and cows (minimum 3 calves).

Diversity management of the farmed wildlife populations is essential to maintain biodiversity while doing selective breeding. Wildlife breeders should attempt to optimize diversity while selecting for horn traits. This can be done by using a mating predictor (need pedigrees) to plan matings and minimize inbreeding or using relationship coefficients within a population (without pedigrees) using DNA profiles. Diversity per say means very little when selecting for horn length. One can for example have a very diverse herd of buffalo with only genes for short horns, or one with long horns, or a mixture. Diversity is thus not an indicator that a herd has potential to breed animals with superior performance (e.g. long horns) it only means that the origin of the breeding animals was derived from a divers gene pools.

Then your success is guaranteed!!!

About the author: Dr Lubout completed his BSc Agric, BSc Agric Hons and MSc degrees at the University of Pretoria, whereafter he obtained his DSc degree at the University of Fort Hare. He has since been employed in various positions in agriculture and the scientific community as: Agricultural Advisor, Senior Lecturer, Assoc. Professor, Professor and HoD as well as Dean of Science & Agriculture. In 2012 Dr Lubout founded his own company called Wildlife Stud Services (WS2), of which he was the Managing Director. He now offers consultancy services as a specialist genetic advisor in wildlife farming. Contact: Paul Lubout (Mobile: 0716425219, e-mail: pclubout[at]gmail.com) Ed. — Over the years, Hillcrest Game Estates has proudly supported WS2. Despite WS2’s closing down, John Firth and the Hillcrest team will continue to support Dr. Lubout in his business endeavours and scientific research—The Firth Family wish Dr. Paul Lubout every success with his future endeavours.

Over the course of the past 2 years, the Covid-19 pandemic has given rise to

Living with the threat of Covid-19 surely has become the new normal and seemingly, with it, the way in which the world of commerce and business functions too.

Send Us A Message